I tend to perform in music venues in Leicester. More often than not, I perform with my band these days, but I like doing occasional solo gigs as it creates a totally different atmosphere for the songs.

When I think of folk music, I don’t think of only classic folk. I think of acoustic-based music of the people. In my childhood and throughout my teenage years this was country music and/ or acoustic-based singer songwriters. I wanted to see if I could do that too.

There are so, so many. I guess if I have to list a few I’d say… Bob Dylan, Paul Simon, Steve Earle, CSNY and Jackson Browne are pretty high up there for me.

White Picket Fence has had a lot of positive feedback from my audiences. That being said, I still enjoy playing What You Want. It has a universal message in just a few words and a simple melody. It seems to resonate with the listeners too.

I have a lot of friends playing in the festival so I’m looking forward to catching them wherever I can.

I’ve been to so many gigs over the years that it is hard to say which is the best. I really enjoyed the first time I saw David Ford play. He is really impressive as a songwriter and performer. He had another songwriter, Jarrod Dickinson (Texas born like myself), opening the night and he was brilliant as well. I’ve made a point of seeing them both individually a few times since that night.

Joni Mitchell – River It is an unusual take on Christmas, painting pictures with words without all the frilly stuff.

In the winter, I like dark stouts or ales mostly, but I find whiskies hard to resist too.

My band is called the Matt Keneson Band and we have a facebook page of course.  In terms of gigs. I tend to post when, where etc. on the band FB page.

There are also a few clips on YouTube as well. 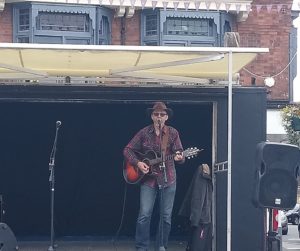 Playing the main stage at the Summer Festival